Could humans live on Mars? Why the architecture of polar bases holds the key

The revived appetite for space exploration is as much of a challenge for architects as it is for engineers as they draw up plans for how we might colonise the solar system, writes Jonathan Morrison

‘Touchdown confirmed,” announced Swati Mohan, head of the guidance, navigation and control operations team. “Perseverance is safely on the surface of Mars, ready to begin seeking the signs of past life.” To much global excitement, Nasa’s $2.7 billion rover mission successfully landed on Mars last week after its seven-month, 290 million mile journey from Earth. This incredible engineering feat may have left many wondering: can we colonise the red planet? Answering the question of whether humans could live on Mars will be an architectural as well as an engineering challenge. Intriguingly it is the development of manned bases in extreme environments such as the polar regions that provide a useful reference point for the investigations of national space agencies and superwealthy buccaneers. Coming in from the cold In the Arctic and Antarctica there are severe restrictions analogous to the hostility of space: there are limitations on logistics and assembly, maintenance and repairs, labour and safety, the volume of internal areas, not to mention crew comfort and training. The physiological and psychological problems of keeping humans sane and safe in space and on ice can be very similar and there are lessons to be learnt. If they were initially utilitarian — such as Captain Scott’s prefabricated hut on Ross Island, built in 1911 and notably lacking in insulation — the most recent examples of manned stations feature impressive engineering.

Think the retractable giant skis that enable the British Antarctic Survey’s Halley VI to be relocated or the aerodynamic shell of New Zealand’s Scott Base that will allow it to cope with winds gusting at 110mph. Both were designed by the British architect Hugh Broughton and oYer far more than the ability to cope with a moving ice shelf and temperatures that can drop to minus 57C.

Rather, they are welcoming habitations where pine scented furnishings and plush leisure facilities are as important as laboratories and hangars; places where scientists can live in a state of once unimaginable comfort.

At the Scott Base, due to be completed in 2027, up to 100 residents might while away the hours in a cafeteria and even a Kiwi-themed pub, while Halley VI — which opened in 2013 — boasts a gym, library, large canteen, bar and mini cinema. The best show of all, however, can be found by looking straight up at the night sky through a central oculus.

“Nasa has certainly kept a firm eye on Antarctica as it looks, not for engineering solutions so much, but at how architecture can respond to the human condition,” Mr Broughton said.

“It’s in areas like wellbeing and psychology that they’re looking to learn: how you deal with isolation, how you create a sense of community while giving people personal space, how you support people in the darkness.

“When you’re designing for extreme environments you’re not going to find a quick solution in an old manual: you need to look at everything you can to find the answer.

“Old hands may say [Halley VI] has become too comfortable. But by making it more comfortable, you can attract a more diverse group of scientists and it also becomes more eccient operationally, especially when computers are involved.”

Even the most dedicated scientist or astronaut needs to relax and blow oY steam occasionally. So if you can put a pub in Antarctica, there’s no reason not to put one on Mars or the ship that takes you there. As Mr Broughton says: “It wouldn’t have to take up that much room, because people can just sit on the ceiling.” 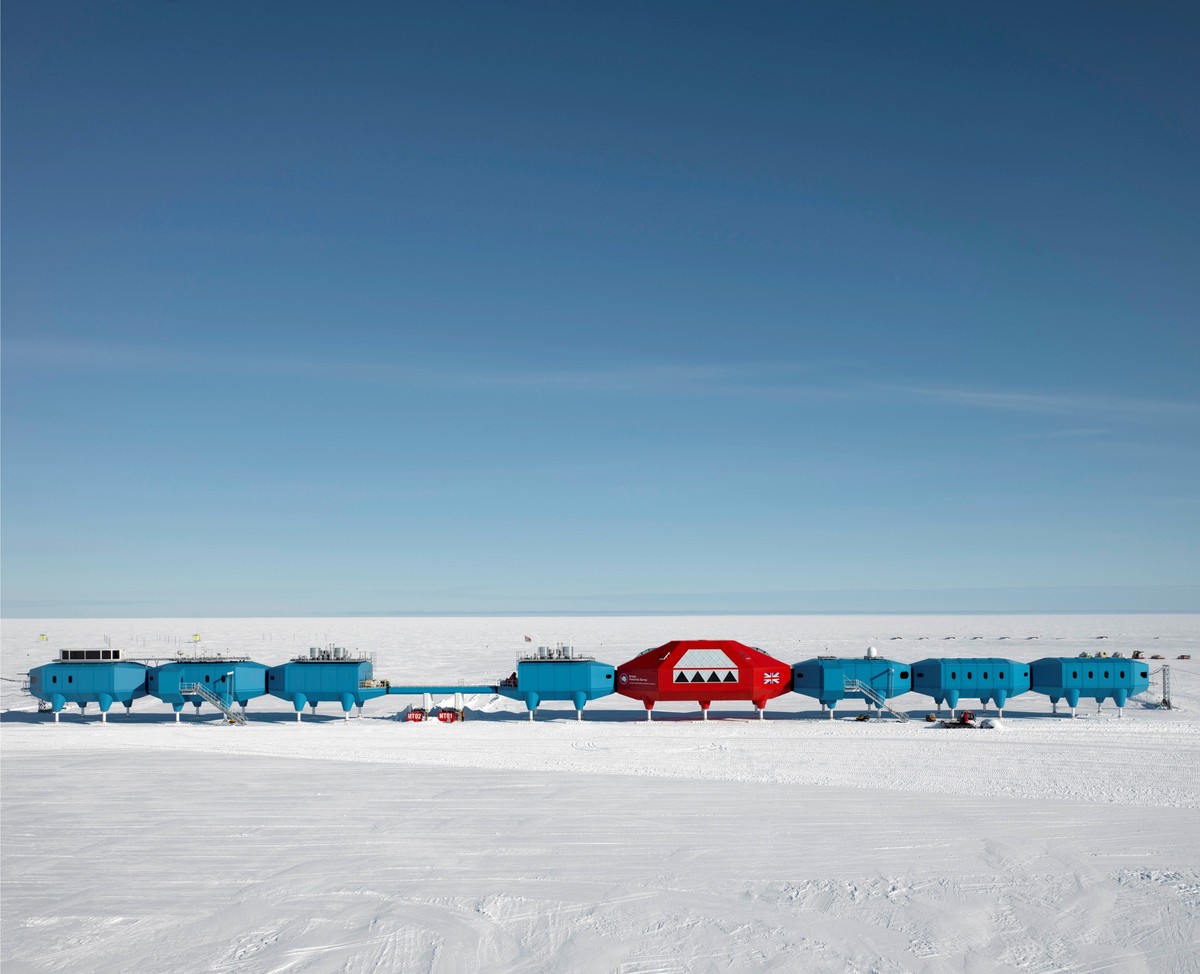 There are other bases in the pipeline that may provide further clues as to how mankind’s colonisation of space might take shape: not least a dramatic underwater laboratory called Proteus that is being constructed 18m down oY the coast of Curacao in the Caribbean.

The brainchild of Fabien Cousteau, grandson of Jaques, and the Swiss designer Yves Behar, it is designed to accommodate 12 scientists for days at a time, allowing them to conduct research on the seabed without the constant need to decompress between dives.

Cousteau hopes his £100 million project will not only lead to important scientific breakthroughs — not least new drugs derived from as-yet-undiscovered species of flora and fauna — but also become “the ocean’s equivalent of the International Space Station” and “help us learn how to live in places like the dark side of the Moon”.

Reaching for the stars

When did architecture start to make inroads into what was thought to be an engineering problem alone? Perhaps when the fragile human cargo was put near the heart of the design for the first time. The best example of this is the window (or cupola, as it is usually termed in these realms).

Let’s look at Skylab, the grandfather of US space stations. It operated for 24 weeks in 1973-74 and was revolutionary not only in terms of engineering but habitability. 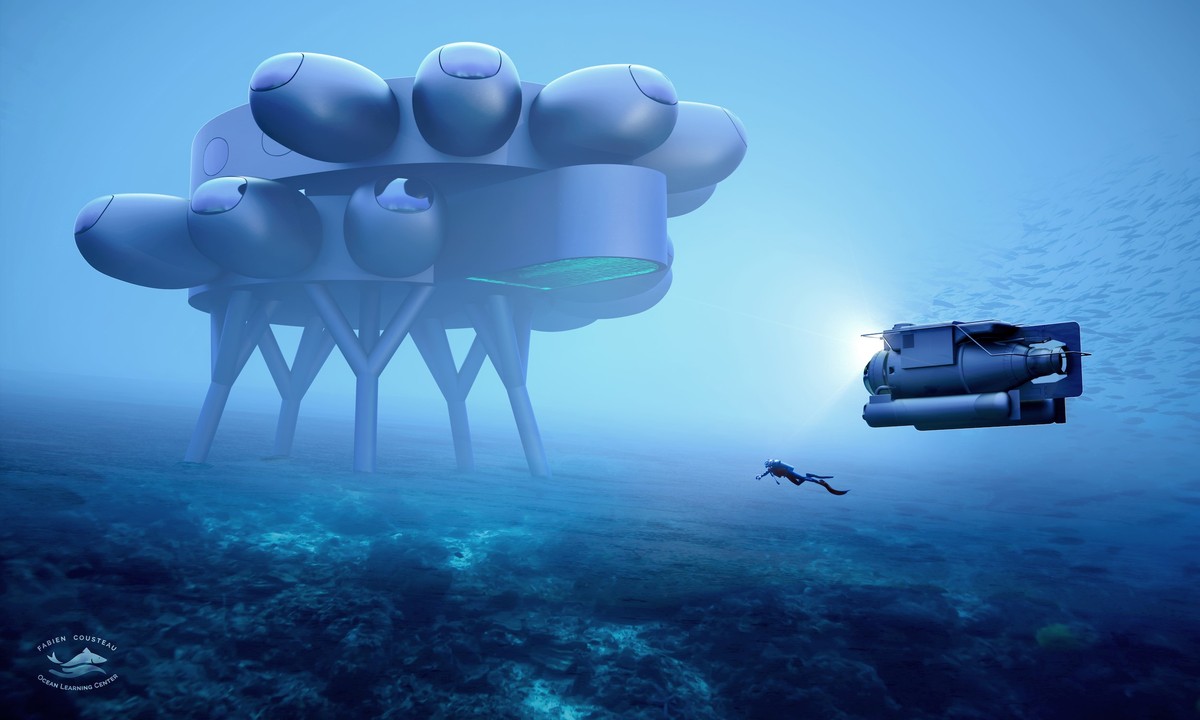 The Proteus underwater laboratory, being constructed by Fabien Cousteau, grandson of Jaques, also provides a vision of how colonisation of space might look YVES BEHAR/FUSEPROJECT

With some impressive foresight, Nasa had earlier recruited Raymond Loewy, the French industrial designer, for advice. It was Loewy who somehow convinced them to introduce a colour scheme, a table with magnetic cutlery, and, most importantly of all, a window, which the engineers battled against as an obvious point of weakness but which was quickly recognised as a necessity for astronauts confined in a largely featureless steel tube.

Ed Gibson, a scientist on the final mission, routinely talked to ground controllers about the designs. He thought that more open space was needed “as a place where people can get away from any claustrophobia ... at least, I feel that if I were penned up for months at a time it would begin to feel pretty much like a cell”. The cupola helped ameliorate this.

There is no gravity in space, but many areas were designed as if there were, with a definite sense of up and down — a “local vertical”, defined architecturally — and it was quickly established that the astronauts were most comfortable when they felt that they and the room were orientated in the same manner.

All these elements will be vital when it comes to colonising the Moon and Mars. But they pale into insignificance compared with another consideration: the approximately $3,000-$14,000 per kilo cost (depending on type of rocket used and volume of payload) of launching material into lower earth orbit (LEO).

This works out at $55 million-$90 million per astronaut. It’s about $1 million per kilo for Mars itself, according to estimates by Foster + Partners, Britain’s biggest architecture firm.

Prices are coming down all the time for LEO thanks largely to SpaceX, but much of what will eventually constitute a base on the Moon or Mars will probably still have to be found there, and we could be talking about a lot of material.

After all, when colonists set out for the New World in the years after 1492, they went in force. It wasn’t one or two elite test pilots but boatloads of craftspeople. Musk is already tweeting about building whole cities.

So alongside an astute location of site — Nasa is looking at old lava tunnels on the Moon as one option for protection against radiation and speeding meteorites — making use of scant resources will also be important for colonisation.

Water, found on the Moon and Mars, can be turned into oxygen and hydrogen for fuel; sunlight can be up to 40 per cent stronger and is easily harvested; and regolith, the loose dust and rock on the surface, can be 3D printed, as Foster + Partners recently proved as part of a Nasa competition.

Architects such as Xavier De Kestelier, formerly the project lead at Fosters and now at Hassell, envisage an “ecosystem” of wheeled robots landing on the surface in advance and printing a hard shell from Martian regolith to protect the astronauts from heavy radiation and temperatures averaging minus 80C and capable of plunging to minus 153C.

This “modular swarm” of autonomous, intelligent robots would also be capable of joining together or reconfiguring themselves to perform a myriad tasks, from digging and crushing rock, 3D-printing and sintering it with microwaves, to simple transport, battery storage and scouting missions.

Once the outer shell is complete, a circular chain of inflatable habitation and support pods would host science labs, workshops, virtual-reality platforms, dormitories and, finally, mankind. De Kestelier has another trick up his sleeve too: bamboo. Fast-growing, it can be used to make the sort of flooring that would grace an Ikea store, as well as provide material for emergency repairs and even sculpture.

He envisages pods clustered around a courtyard — one of the most enduring and pleasing architectural tropes — and early sketches show how the pods would oYer views across the Martian landscape. In short, it’s more boutique hotel than prison.

It is, perhaps, a first step towards utopia. Not least because in a “closed-loop” system on a distant planet, where nothing is wasted, techniques might be learnt that could be applied to our increasingly resource-starved home. As with the Apollo programme, the spin-oY benefits are likely to prove substantial.

“I wanted to create something that if placed in the Atacama Desert would look like a cool place to stay,” De Kestelier said. “What we’ve done is realistic; we’re not just coming in at the end to do a pretty picture. Hopefully we’ve been able to give it an overall shape and vision while being clever.”

Other visions for a Mars base are even more elegant. The winners of the Nasa 3D Printed Habitat Challenge to facilitate an oY-world settlement proposed a thick but largely translucent protective shell made out of ice which is abundant in the polar regions or which could be collected from the Martian night frost over time.

“It’s a beautiful material to build with and that will contribute to the mental wellbeing of the astronauts and their morale,” Masa Sono, the lead architect, said. “The day cycle on Mars is similar to Earth so by being transparent it gives the astronauts a circadian rhythm too. But we should celebrate the stunning landscape and the novelty and wonder of living there.”

Broughton, who has also just been commissioned to revamp Australia’s Davis Research Station in Antarctica, has his own designs on Mars, albeit executed much closer to home.

The architect is in the process of creating a prototype two-storey Martian home at a site in Bristol, consisting of a gold-covered inflatable shell. It will be filled with whatever passes for regolith in the southwest, and will feature a lower level that will be buried for maximum protection.

Inside the house, which will be put on display for five months next year, will be hydroponic tanks, used to grow plants in nutrient solutions without the use of soil, and an experimental circular wastewater system.

And in one respect at least it is already light years ahead of anything emerging from a Nasa lab: it is currently the only extra-terrestrial building to have received planning permission.

“I don’t think the Bristol planning department gets half the credit they deserve,” Broughton joked. “No one else has approved a space station before.”